When Casper launched in 2014, it was looking to do what some investors saw as impossible: disrupt the large but mundane bedding industry with a one-mattress model that challenges the traditional premium pricing of competitors, which often run above $2,000.

Casper offers a custom multilayer foam mattress that fits in a box and can be shipped nationwide to consumers in what is the world’s biggest mattress-buying market, estimated now to be between $14 billion and $18 billion. The global mattress industry, by some estimates, could more than double in the next five years to as much as $39 billion.

Celebrity influencers, like Kylie Jenner, have helped, taking to Instagram to advertise their new Casper mattresses and nearly crashing the company’s website in the process by garnering more than 870,000 likes.

Casper CEO Philip Krim has compared the company’s ambitions to the likes of Nike, transforming the industry of sleep as Nike transformed fitness. The start-up is moving beyond mattresses as it tries to cater to more millennial must-have niches, including sheets and bed frames, even a bedside light called the Casper Glow lamp, which debuted with a lot of promise but mixed reviews. The $340 million in funding that Casper has attracted — from sports and entertainment celebrities like Carmelo Anthony, 50 Cent, Adam Levine, Leonardo DiCaprio and Kevin Spacey (well before his legal problems) — indicates that Krim’s message has resonated in some deep-pocketed areas, and not just in Hollywood but with some elite venture investors, such as Ashton Kutcher.

Ben Lerer, managing partner at Lerer Hippeau and an early investor in Casper —which ranked No. 8 on the 2019 CNBC Disruptor 50 list — wrote in an email to CNBC, “As the company continues to scale, I see significant possibilities for Casper to reach customers everywhere in the U.S. and across the globe.”

“The Casper team is incredibly savvy in how they spread the word — using traditional routes like brick-and-mortar stores, mailers and TV ads, along with more digitally native channels — as a way to reach every type of potential Casper owner.”

The celebrities and other investors stand to make millions as the 5-year-old company reportedly courts underwriters for its initial public offering, in what has been a crowded year for IPOs.

Business news site The Information leaked Casper financials in March, showing the company projected revenue for 2018 of $373 million (more than $100 million in the third quarter alone), a 49% year-over-year increase. Casper is a recently minted unicorn, valued at $1.1 billion after a Series D funding round revealed in March fetched an additional $100 million for the company, a deal the company did confirm.

The company would not confirm The Information report but said it now has more than 1 million customers and did nearly $400 million in revenue last year.

Some of Casper’s publicly traded competitors already have been performing well this year, setting up an opportunity for a potential IPO, said Kathleen Smith, principal at Renaissance Capital, manager of two IPO ETFs (IPO, IPOS) and an advisor to IPO investors.

Tempur Sealy stock is up more than 50% year to date, while Lovesac, a furniture retailer with a focus on sectional pieces sold online and targeting a younger demographic, has risen more than 55%. Purple Innovation, which has a closer focus on sleep just like Casper, is up 5% this year, but it is still below its first-day trading price after an IPO in late 2015.

Krim has remained tight-lipped on the company’s plan for an IPO this year but told CNBC in March that he was excited to see the market performing well.

Investors are really cautious when they can’t figure out when will the company will be profitable and it is losing lots of money. … We need to know gross margins, and we are in the dark on Casper.
Kathleen Smith PRINCIPAL AT IPO INVESTMENT ADVISORY FIRM RENAISSANCE CAPITAL

Industry trade group The Better Sleep Council also indicates that consumers are cutting their replacement cycles and buying mattresses more frequently, purchasing a new bed every 8.9 years on average in 2017, compared with every 10.3 years in 2007.

While Casper may have been one of the first to invest in e-commerce, it now faces greater competition in an industry it helped grow.

Earlier this month, Tempur-Pedic mattress maker Tempur Sealy announced it would introduce its first bed in a box, called the Tempur Cloud.

There are other heavily funded start-ups with similar business models, like Leesa Sleep and Tuft & Needle.

Lessa, which also sells a “bed in a box,” has raised $32 million from notable venture backers including the CEO of eco-brand Seventh Generation and the founder of Toms Shoes.

Serta Simmons’ deal for Tuft & Needle expanded the direct-to-consumer mattress company with Serta Simmons’ pre-existing retail footprint. In addition to its e-commerce effort, Lovesac has 76 showrooms across the U.S.

Casper has the backing of Target, which reportedly considered buying Casper for $1 billion but ended up investing in the company instead. Target is in its own battle with Walmart, which has its own online-only bedding brand Allswell. Amazon sells Casper mattresses but also last fall started selling memory foam mattresses under its AmazonBasics and Rivet brands, with the latter including a free 100-night trial just like Casper. 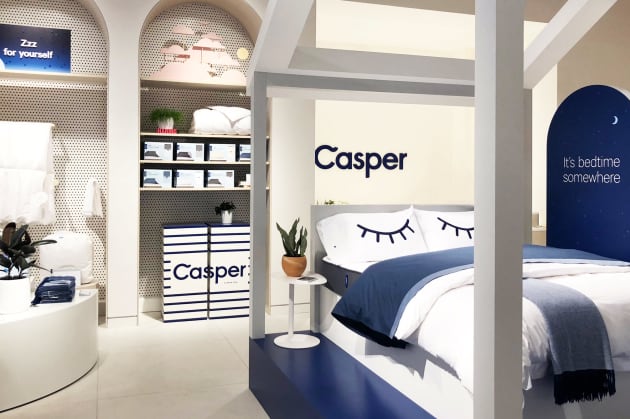 Although one of the key drivers to e-commerce mattress companies has been their ability to cut out the “middleman” in order to drive down prices, there has been a concerted effort to open more showrooms and expand their retail footprint as they compete.

Mattress Firm, which filed for Chapter 11 bankruptcy and announced the closure of 700 stores last year, has showcased Purple Innovation mattresses in its existing sites.

“Anecdotally, we have heard of people traveling several hours to visit these showrooms and test the products before buying,” KeyBanc’s Thomas wrote. “We believe a brick-and-mortar presence will ultimately be a cornerstone of growth for many of these young companies.”

Casper, which has announced plans to open 200 showrooms, has pushed to expand its brick-and-mortar presence and has showcased its products through partnerships with Nordstrom, West Elm and Target. The company already as 20 “sleep shops” in cities like New York, Atlanta, Chicago, Minneapolis, Denver, Houston, Seattle and Toronto. The plan is to continue opening the stores in “top-tier” malls, according to a Wall Street Journal report.

Sleep Sherpa, an online mattress showroom, opened a store in Minneapolis that features many different e-commerce mattress brands including Leesa, Purple Innovation and Tempur Sealy. West Elm, Bed Bath & Beyond and Macy’s have been selling mattresses from some of these e-commerce brands as well.

Hard to know what Casper is really worth

The Lyft and Uber IPOs showed that one difficulty in valuing start-ups ahead of an IPO pricing is lack of a clear peer group of companies already valued by the market. Casper isn’t in a brand-new industry, which helps. It has the public stock market points of comparison, from the old guard in bedding like Tempur Sealy to the recent and similar IPOs like Purple Innovation and Lovesac.

Smith said in addition to the narrow bedding company sector, experts can look to e-commerce companies that sell home goods, such as Wayfair or Etsy, though those names are imperfect fits because they are not selling their own products. There also is a case to be made that the recent IPO of Levi Strauss has some relevance in terms of how retail brands are being valued by investors.

“Levi’s is a great brand, and the Casper brand has value,” Smith said. She noted that recreational equipment retailer Yeti Holdings conducted a successful IPO last fall. “That’s the kind of thinking we will have to do,” she said.

But Smith indicated there is nothing in the evaluation of an IPO candidate that can supercede a look at the financials and how much the company is losing. She said Casper is not likely to be in the position of a Lyft or Uber, with massive losses and no real clear ability to explain the path to profitability.

“As a broad generalization, investors are really cautious when they can’t figure out when will the company will be profitable and it is losing lots of money. In the case of Casper, or even when Pinterest came out and was losing money, you could see how it would get to a point where it is profitable. ” But Smith added that as of now, “We need to know gross margins and we are in the dark on Casper,” she said, referring to the measure that analysts use to understand how much money a company is retaining from each dollar of sale.

The leaked financials help, to a degree.

Casper could be moving closer to profitability based on a Q3 revenue increase of more than 60%, while its marketing spend only increased roughly 13%, according to The Information report.

Lovesac has annual sales of $162 million and is growing at 60%, similar to Casper’s Q3 growth rate. Its gross margins are 53%, and it is trading at about 2.7 times annual sales. Tempur Sealy is trading at 1.8 times sales. Back-of-the-envelope math valuing Casper at three times its reported $400 million in sales would imply a market cap of $1.2 billion, just $100 million above the $1.1 billion valuation reported after its last fundraising.

Purple Innovation is currently valued at roughly $364 million, with more than $300 million in sales. That lower valuation can be at least partially explained by its brick-and-mortar partner Mattress Firm’s struggles, and the fact that it is losing money — negative net income for the past four years as it has spent more on advertising — and has lower gross margins (39%) than Lovesac or Tempur Sealy.

Smith said Casper should be an easier business to model than the recent ride-hailing company IPOs — once it shares a full set of numbers.

“It is making a mattress and developing a brand,” she said. That may make Casper easier to value than other recent IPOs that received a great deal of attention but that investors quickly soured on due to questions about financials, “Lyft you could not figure out,” Smith said.